A legislative clash looms over whether the military justice system should be overhauled to change the way all serious crimes are handled.

WASHINGTON — Defense Secretary Lloyd J. Austin III formally endorsed changes on Wednesday to the way the military handles sexual assault cases, a sharp retreat from years of opposition by prior secretaries on the issue.

The changes, which were recommended by a Pentagon commission convened by Mr. Austin, do not go as far as a bill that Speaker Nancy Pelosi said on Wednesday that she intended to put on the floor soon. That legislation would take decisions about prosecuting all serious crimes committed in the military — not just sexual assaults — from the hands of commanders.

Senator Kirsten Gillibrand, Democrat of New York, has pushed a similar bill for nearly a decade, but she has faced resistance from the chairman and top Republican on the Senate Armed Services Committee.

“As you know, my first directive as secretary of defense, issued on my first full day in the office, was to service leadership about sexual assault,” said Mr. Austin, who appeared before the House Armed Services Committee with Gen. Mark A. Milley, the chairman of the Joint Chiefs of Staff.

“In the coming days, I will present to President Biden my specific recommendations about the commission’s finding,” Mr. Austin said. “But I know enough at this point to say that I fully support removing the prosecution of sexual assaults and related crimes from the military chain of command.”

The competing visions of how far to go in altering the military justice system set the stage for a potentially intense legislative battle over an issue that has vexed the Pentagon for generations with little progress. Some military leaders have begun to protest such changes.

The push to address sexual assault is among a number of issues that are escalating on Capitol Hill — often but not always along partisan lines — over the composition and culture of the United States military and its broader role in the world.

Mr. Austin and General Milley were peppered with questions about policies to combat extremism and the military’s curriculum about race relations, the increasing interest among lawmakers to rein in presidential war-making power and the future of Afghanistan as 20 years of American involvement in the country comes to a close.

General Milley responded testily to a complaint by Representative Michael Waltz, Republican of Florida, about how the Military Academy at West Point was teaching literature about “understanding whiteness and white rage.”

Describing as “offensive” recent Republican accusations that leaders of the military are too “woke,” General Milley alluded to the attack on the Capitol on Jan. 6, in which some veterans and active-duty members participated.

“I want to understand white rage, and I’m white,” he said.

“What is it that caused thousands of people to assault this building and try to overturn the Constitution of the United States of America?” he continued. “What is wrong with having some situational understanding about the country we are here to defend?”

The clashes also center on the end of the United States military presence in Afghanistan and presidential authority to carry out long-running military operations to combat terrorist groups around the world.

This week, Senator Mitch McConnell, Republican of Kentucky and the minority leader, took to the Senate floor to criticize the Biden administration’s withdrawal in Afghanistan and a bipartisan measure that the House has passed to repeal its 2002 authorization of force in Iraq, which presidents have repeatedly applied well beyond its original intent.

The Senate Foreign Relations Committee had planned a vote on a similar repeal this week, but postponed it after some Republicans requested they first receive a classified briefing on the issue.

“I would have welcomed that debate before the Biden administration began its hasty retreat from Afghanistan without a plan to sustain counterterror missions or support our friends,” Mr. McConnell said this week. “And it’s one we should have before we vote to repeal these authorities. Reality is more complicated, more dangerous and less politically convenient than its supporters believe.”

On Wednesday, General Milley said the repeal of the 2002 Iraq resolution would have no practical effect on military operations, noting that a much broader authorization, passed days after the Sept. 11, 2001, attacks, “gives us all the authorities” needed to fight threats overseas. (A growing group of lawmakers seeking greater military restraint would like to see both measures repealed.)

When it comes to how the military prosecutes sexual assault, Mr. Austin said Wednesday that he would work with Congress to make the changes, as required by law, noting, “We must treat this as the leadership issue it is.”

His appointed commission recommended the inclusion of a special victims crimes unit in an independent prosecution system, which would also cover domestic violence. But the commission did not propose dealing with other serious crimes through the independent prosecution system, as would the proposal by Ms. Gillibrand and one introduced Wednesday by Representative Jackie Speier, Democrat of California.

“Senator Gillibrand and I have dedicated the better part of the last decade to right this wrong,” Ms. Speier said. “I first introduced legislation on this topic Nov. 11, 2011 — 10 years ago. The proposal was dismissed and attacked, and so was I. But the voices of the victims and the survivors could no longer be silenced.”

This week, several military service chiefs expressed resistance to the measure, teeing up a potential legislative battle that Mr. Biden, who has voiced support for Ms. Gillibrand’s efforts, is likely to end up having to weigh in on.

The congressional bills, “would seem to lengthen the process, limit flexibility, and potentially reduce confidence among victims,” Gen. David H. Berger, commandant of the Marine Corps, said in a letter released by Senator James M. Inhofe, Republican of Oklahoma and a leading opponent of the Senate bill. “It is unclear to me whether or not the bill would promote the interests of justice by increasing accountability for perpetrators of sexual assault.”

Senator Chuck Schumer of New York, the majority leader, supports Ms. Gillibrand’s measure and may bypass the Senate Armed Services Committee, where it is opposed, at least in part, by both of its leaders.

On Wednesday, Ms. Pelosi, flanked by Ms. Speier, Ms. Gillibrand and members from both parties, some of whom choked up as they spoke about victims of assault, said her legislation would be taken up soon.

“We will bring this bill to the floor; it will pass in the House,” she said. “I hope that it will succeed in the Senate as, as well.” 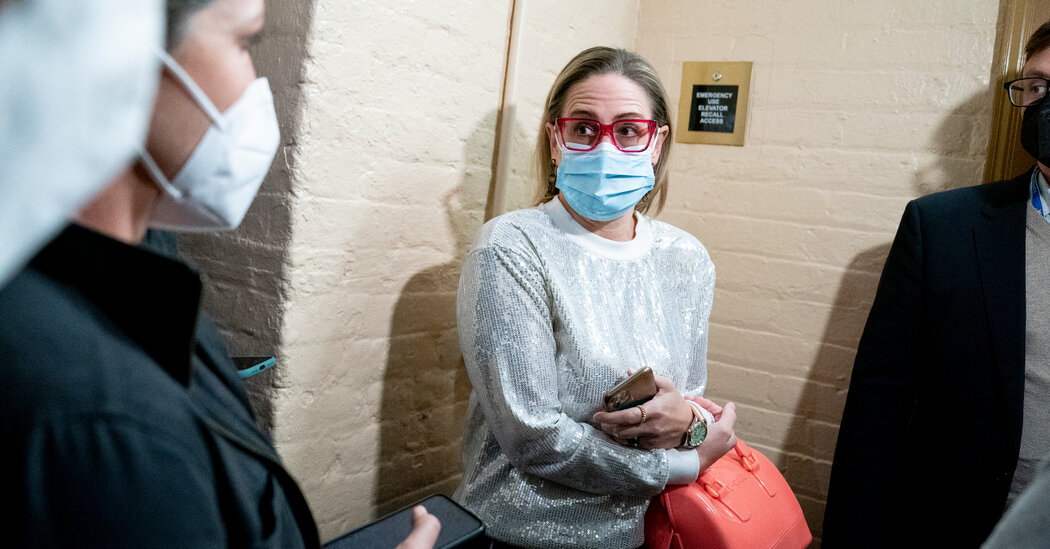 How Democrats Would Tax Billionaires to Pay for Their Agenda...